When this restaurant opened a few years ago they served pub grub with finesse and their burger was perhaps the most talked about dish in Stockholm for a very long time.
Now the style has slightly changed and with my friend "Rai" behind the pots and pans it's more of a budget version of fine dining. They only serve one five course menu at a price of 550 sek (85$) which for this level of cooking is ridiculously cheap. And when it comes to the quality of the food and the ingredients it's far from budget.
The restaurant is run by Mr. Crespi. He and his team run a handful of restaurants in this block of Stockholm Old Town; Djuret (see previous blog), Leijontornet 12x8 (all-in classic fine dining opened only 12 times a year for total eight guests), Svinet (backyard restaurant only serving pork) along with the newly opened wine bar The Burgundy and the cocktail bar Tweed.

It was with a glass of NV Ruinart Blanc de Blancs and a chat with Mr. Crespi himself I started this evening while waiting for my friends to arrive.
The restaurant is tiny with a communal table in the middle where the big part of the guests are seated. Around the table they have the "wine wall" where you can make some real bargains. Apart from that they also have an impressive wine list that is very advantageously priced. We choose two bottles from the evening. From the wine wall we picked a bottle of 2006 Château Pontet-Canet and from the bible-like wine list we chose a bottle of 2010 Meursault Tessons, Clos de Mon Plaisir from Domaine Roulot. The white Burgundy might have been the wine of the evening. It was so full of mineral fragrance that when I stuck my nose in the glass I was transported back in time to the smell of fire works at New Year's Eve when I was a kid. Fantastic wine with such an appetizing balance and great lenght. 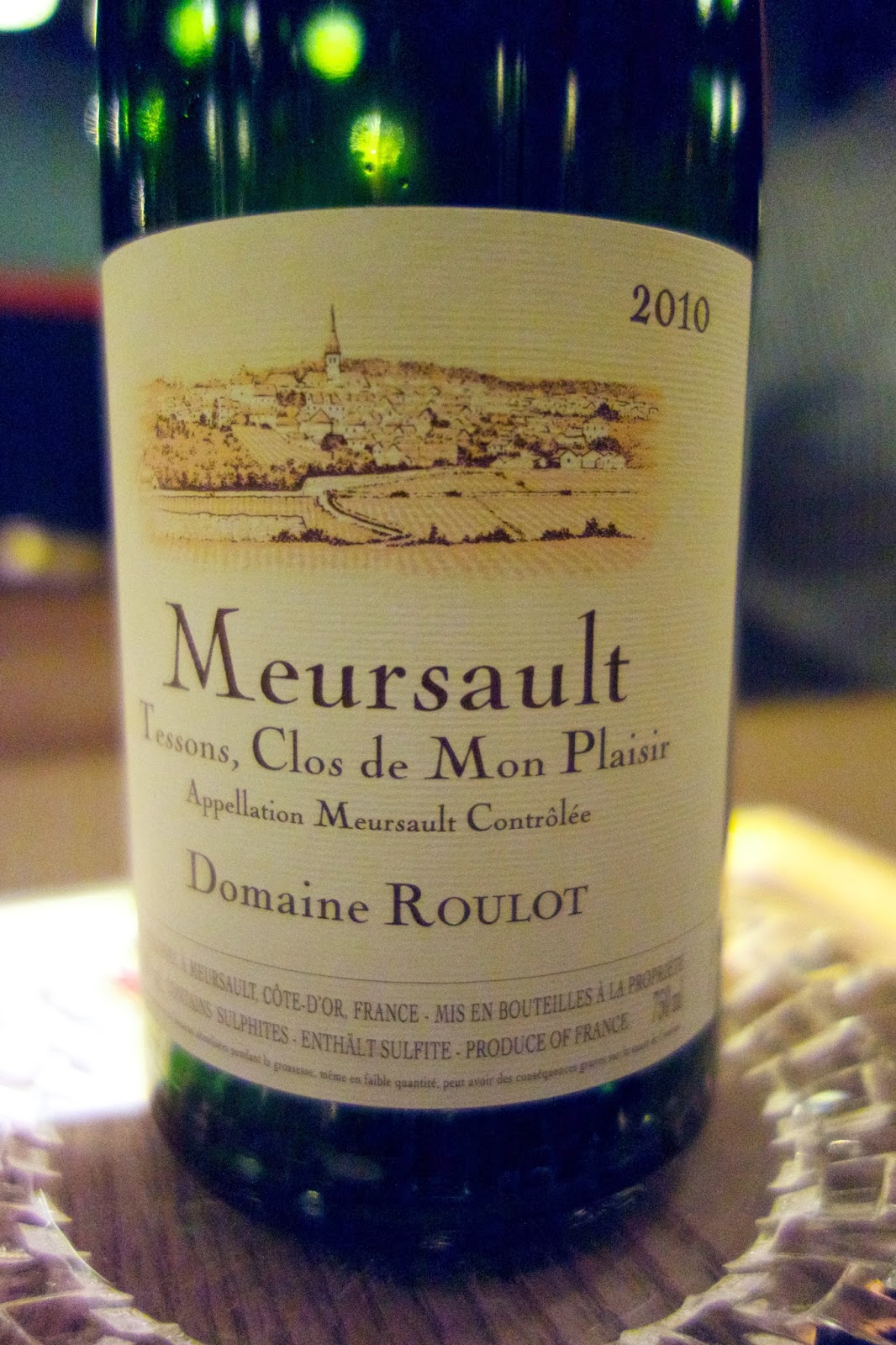 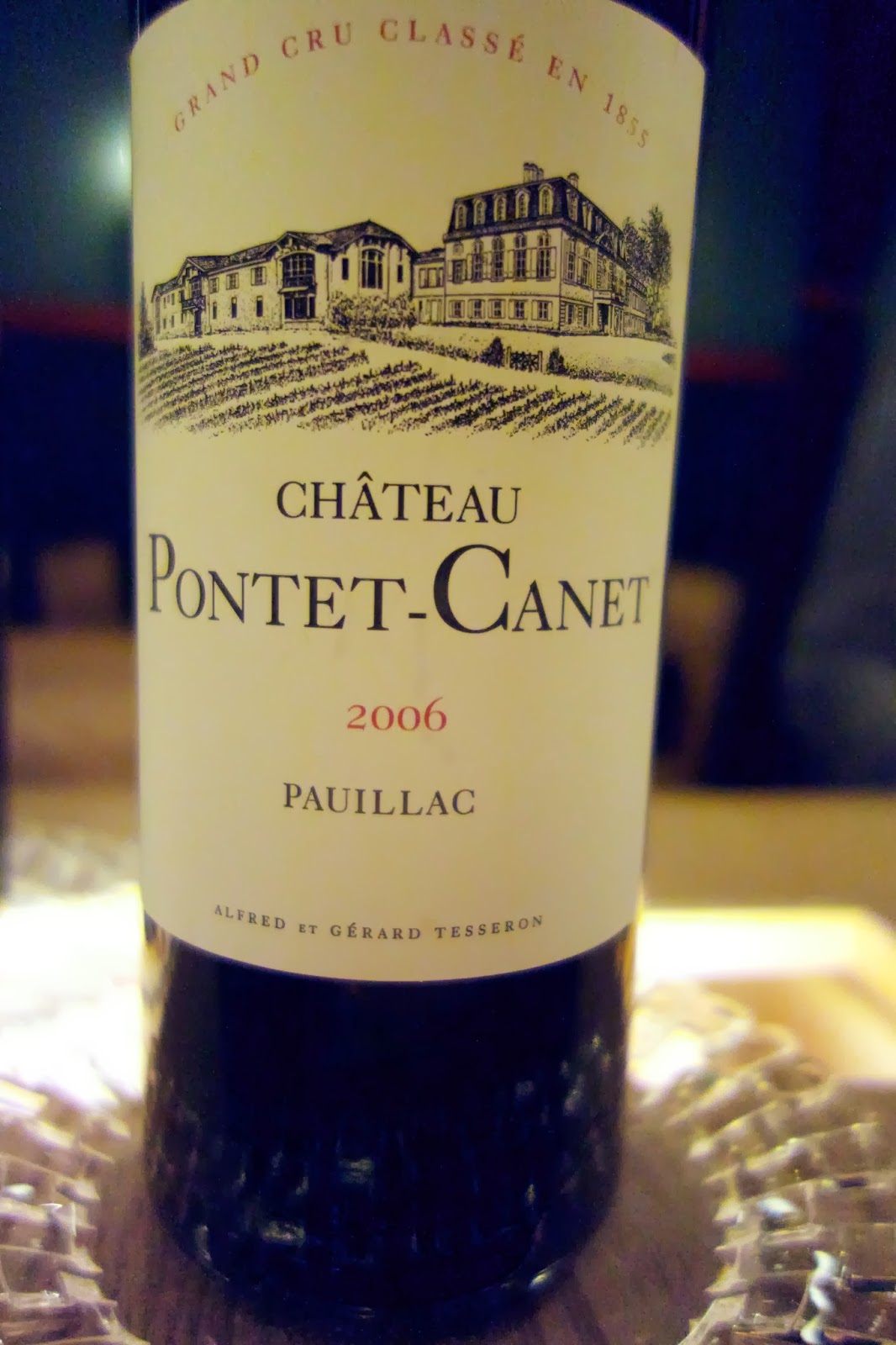 As an appetizer we got breaded duck leg with sour dip. Simple and tasty. 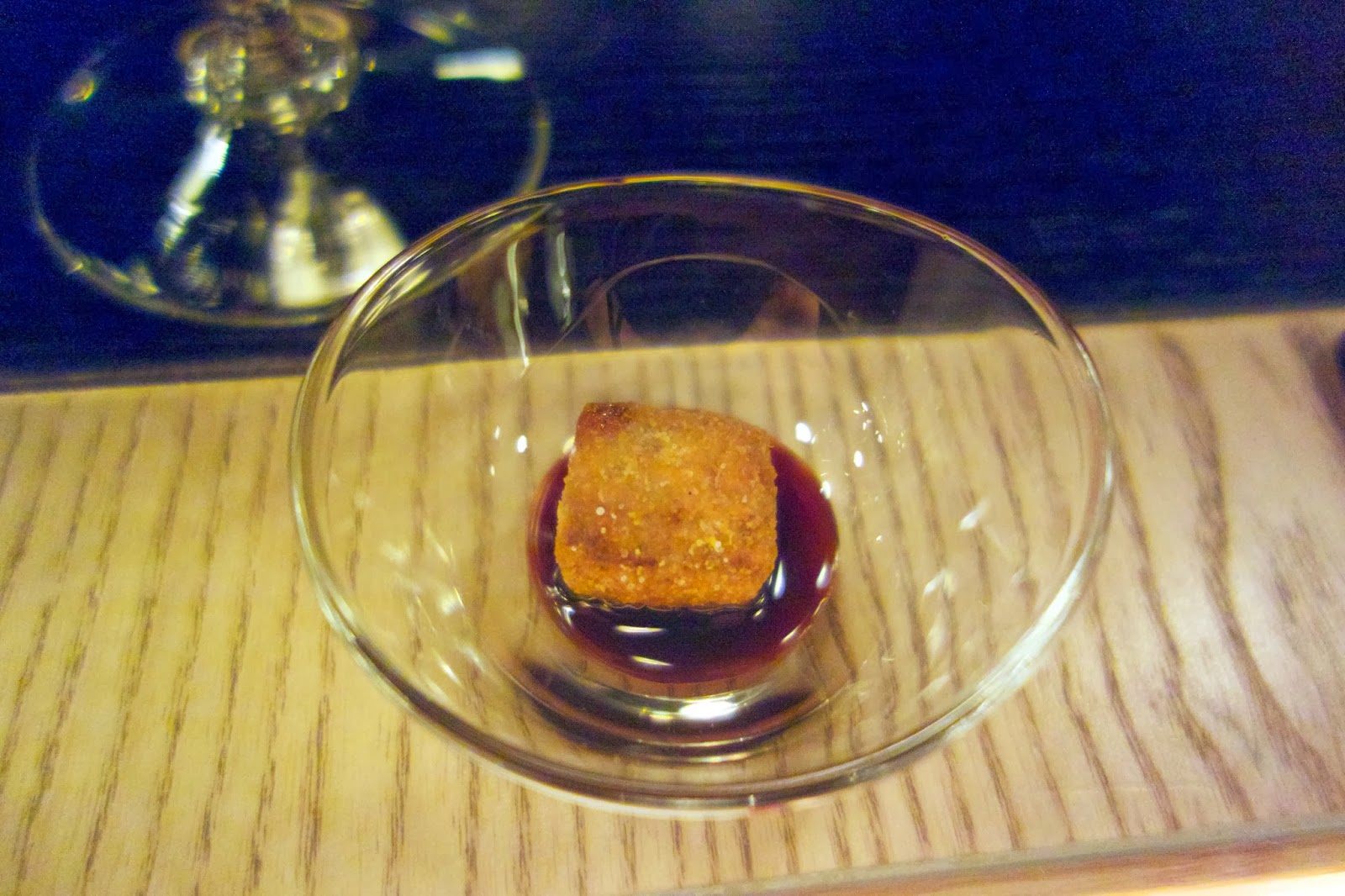 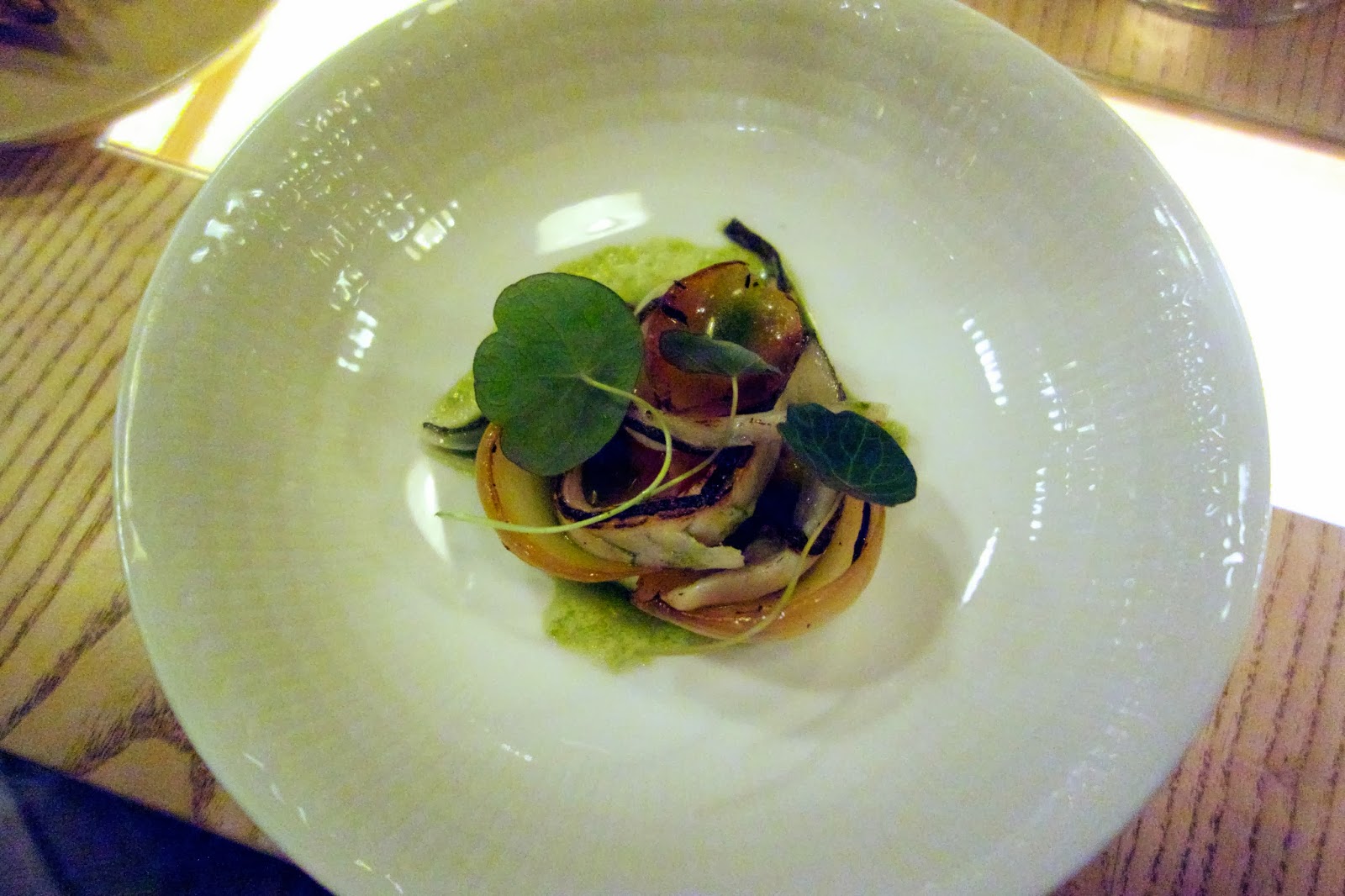 Coarse tartar of fallow deer with parsley emulsion, fried oyster mushrooms and fried herbs. I never get tired of a good tartar and this one was amazing. The very pungent herb lovage was noted in the mix and it worked very well with the dish. Normally I think this herb is too strong and dominant. 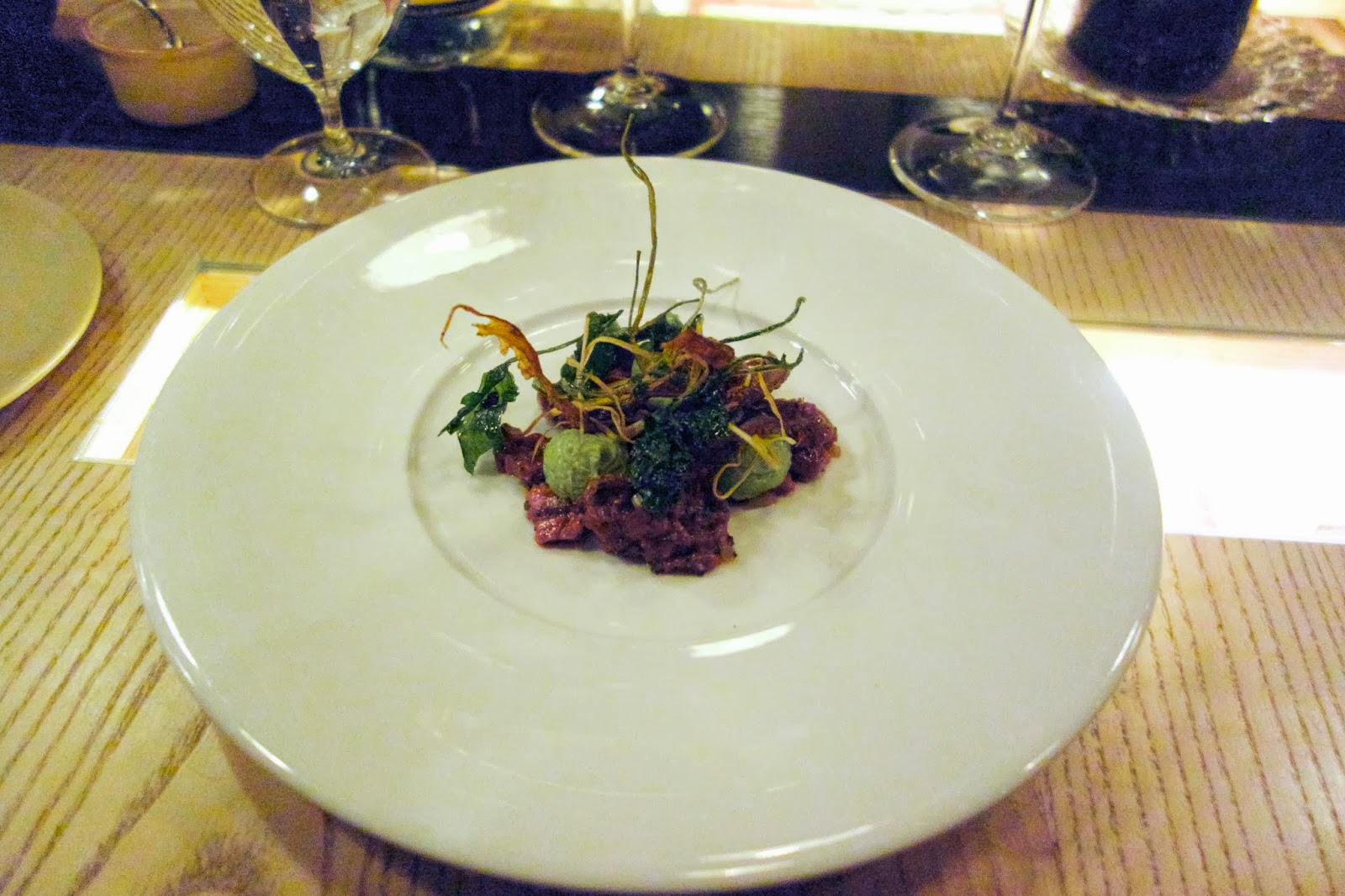 Next dish was a lobster and truffle serving. It wasn't part of the original five-course menu but an additional option we couldn't resist to order. Just on the edge of being too salty, but still great. 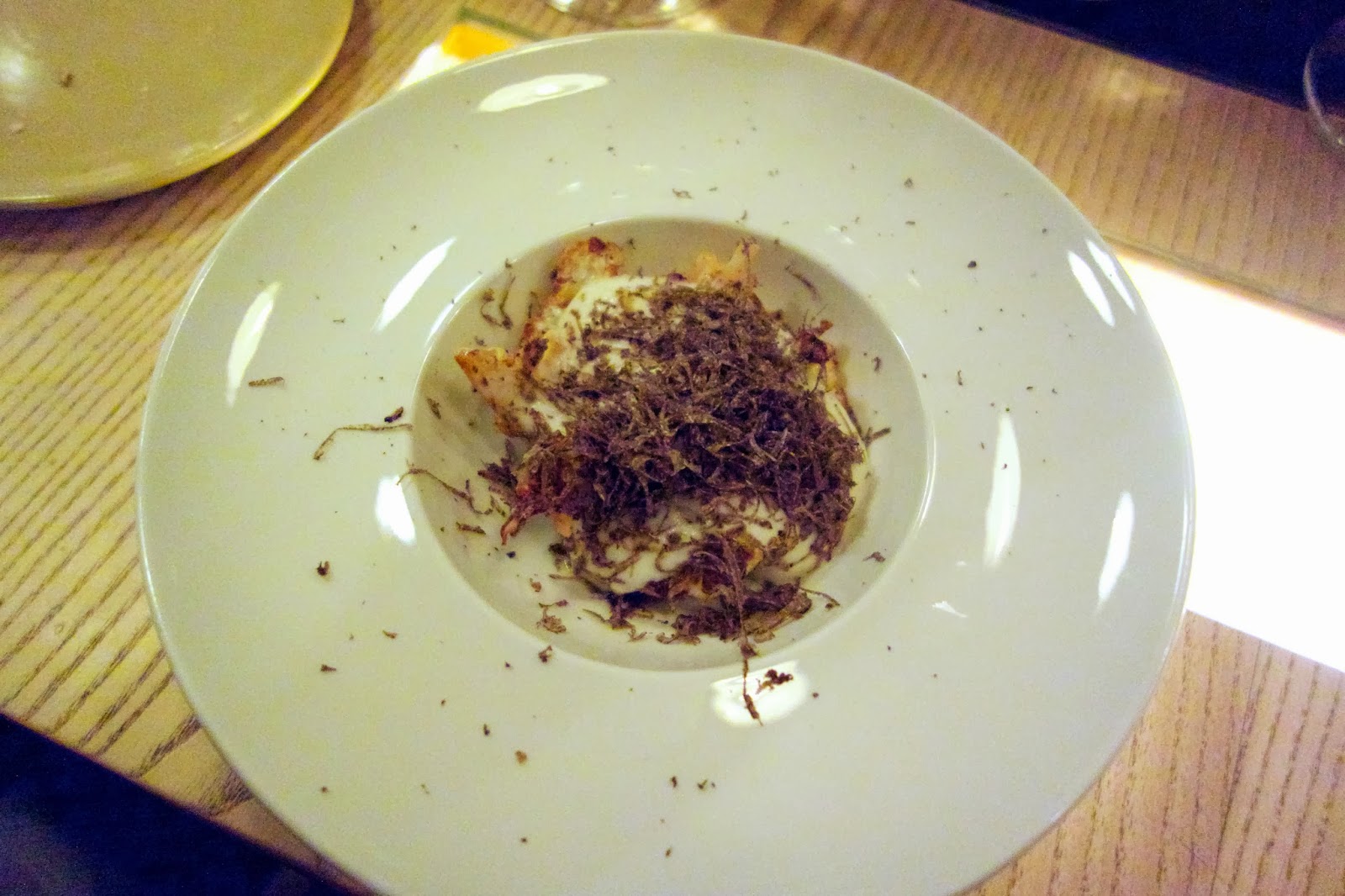 Burnt salsify with cod, cockles, toasted almonds, smoked beurre blanc and seaweed. So, so good and along with the dish we had a glass of the wine from their wine pairings; 2008 Mas d'en Compte Blanc from Celler Cal Pla. This white Priorat is made from the grapes Garnacha Blanca, Picapoli, Pansal (Xarello) and Macabeo, all matured in 80% new French oak and has aromas of vanilla, dried apricots and fennel with a rather low acidity. Interesting wine, if not a personal favorite, it matched the food perfectly. 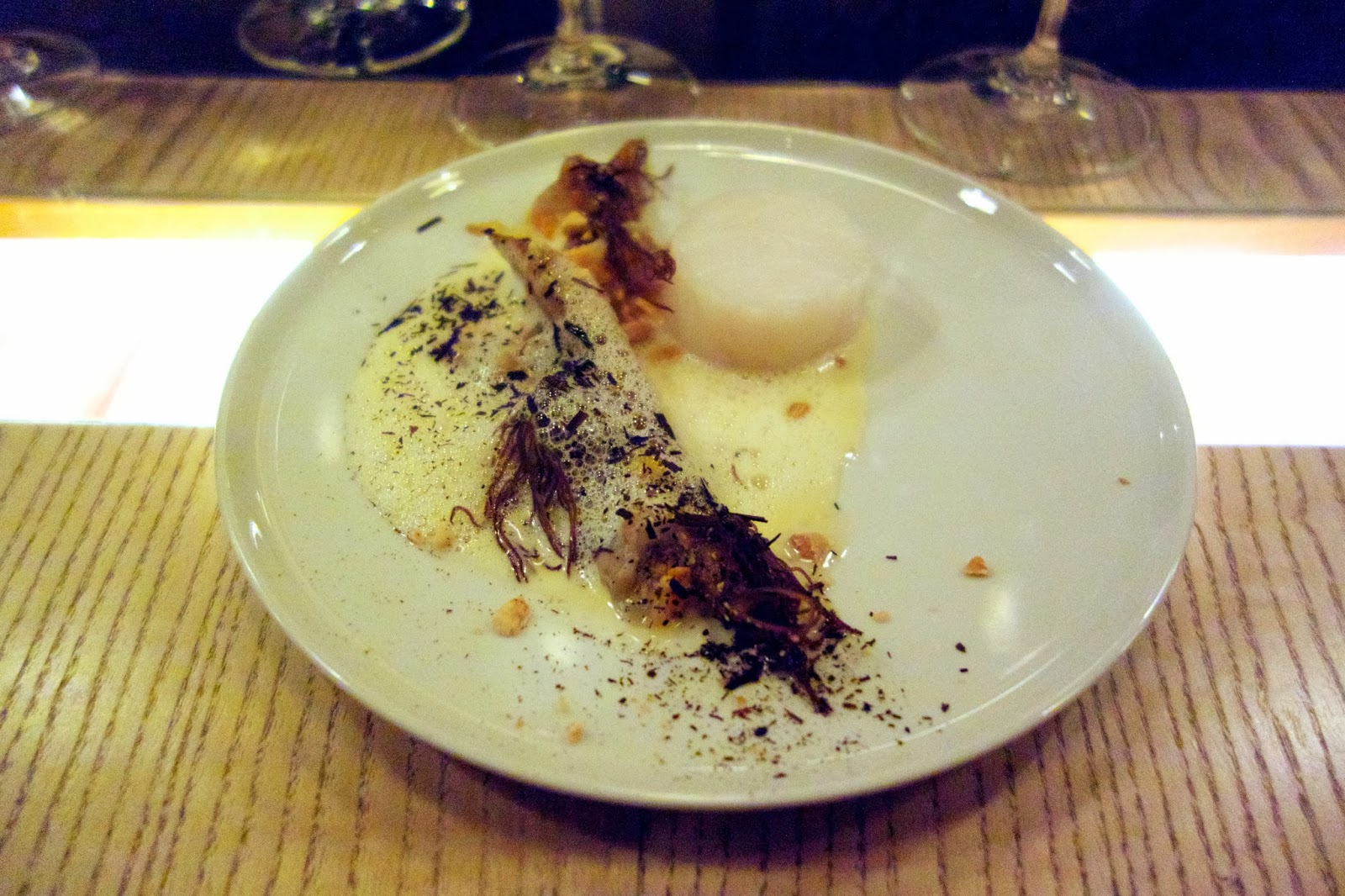 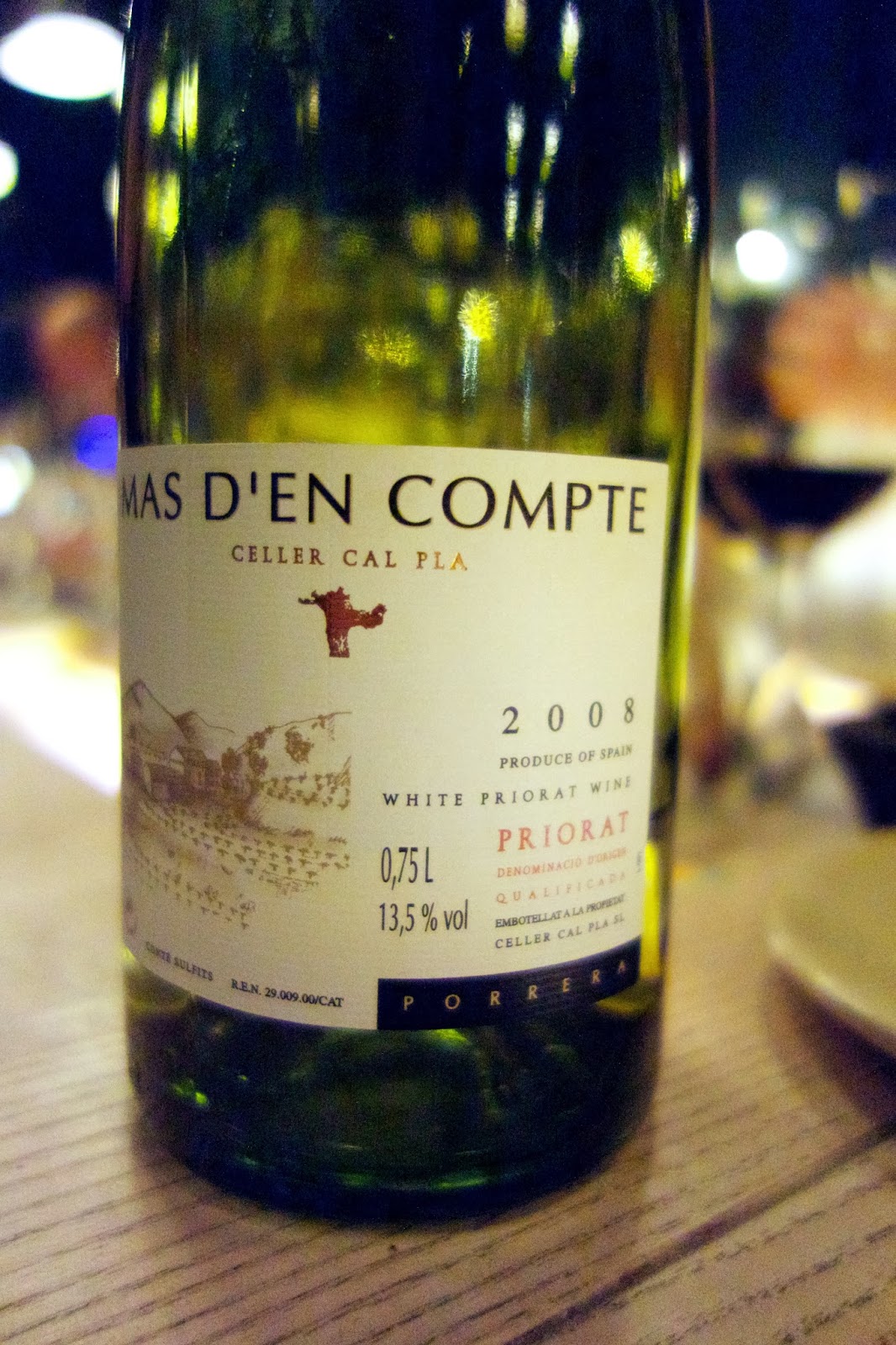 Now we slowly started to sip on the Pontet-Canet that had been decanted for a good hour. Great, medium bodied claret with classic nose of cassis, toasted oak and a hints of violets.

Unfortunaly the super tasty main course served next with its rich and sweet flavors kind of killed the wine and every bit of fruit existing.
Iberico pork neck glaced with hazelnut
butter and served with an intense red cabbage pure with a lot of natural sweetness, baked pointed cabbage, pork jus and black truffle. Such an amazing dish but the poor wine was lost. Should have ordered a richer, more fruit driven wine. A bit of a waste of a great Bordeaux. 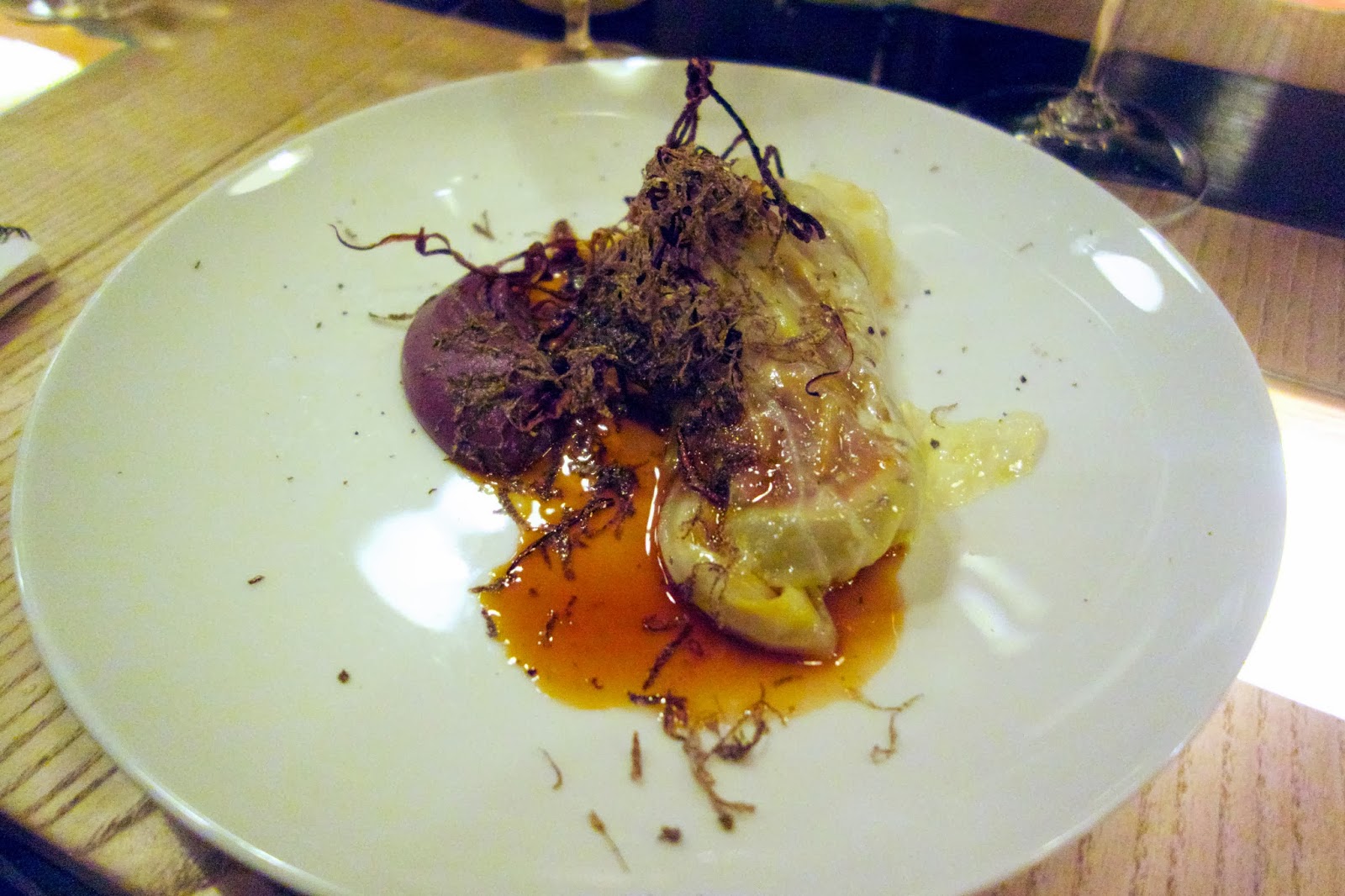 As dessert we were served an ice cream made of caramelized rice with grilled pear, lemon mascarpone, sake syrup and puffed wild rice. Good but a bit anonymous after the other great dishes. 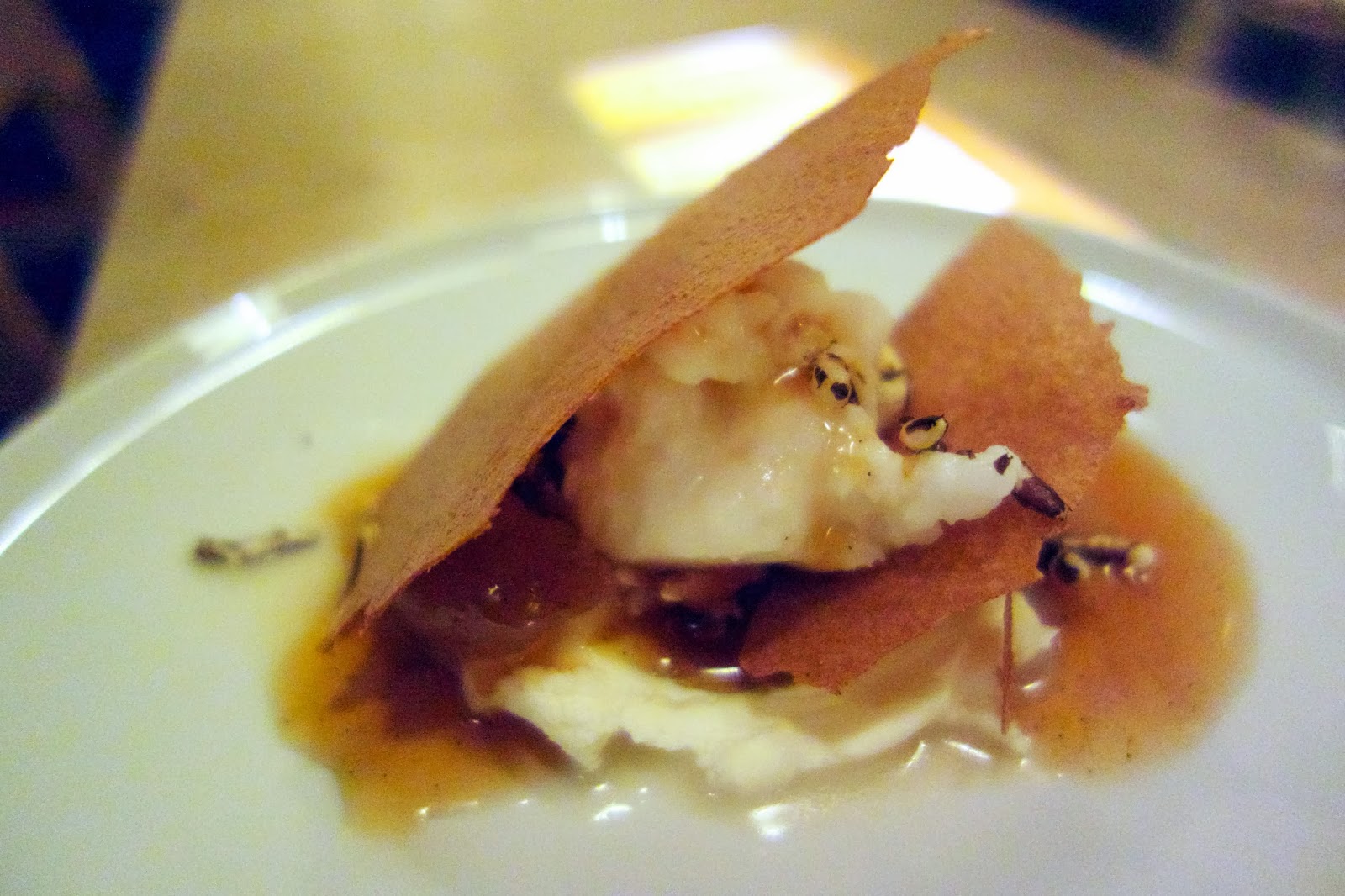 After the dessert we left the restaurant and walked to the other side of the block to their cocktail bar Tweed. It's a very cozy bar that looks like an old men's club.
A second dessert was here offered; Chocolate creme with vanilla ice cream and "polkagris", a hard, swedish candy seasoned with peppermint. 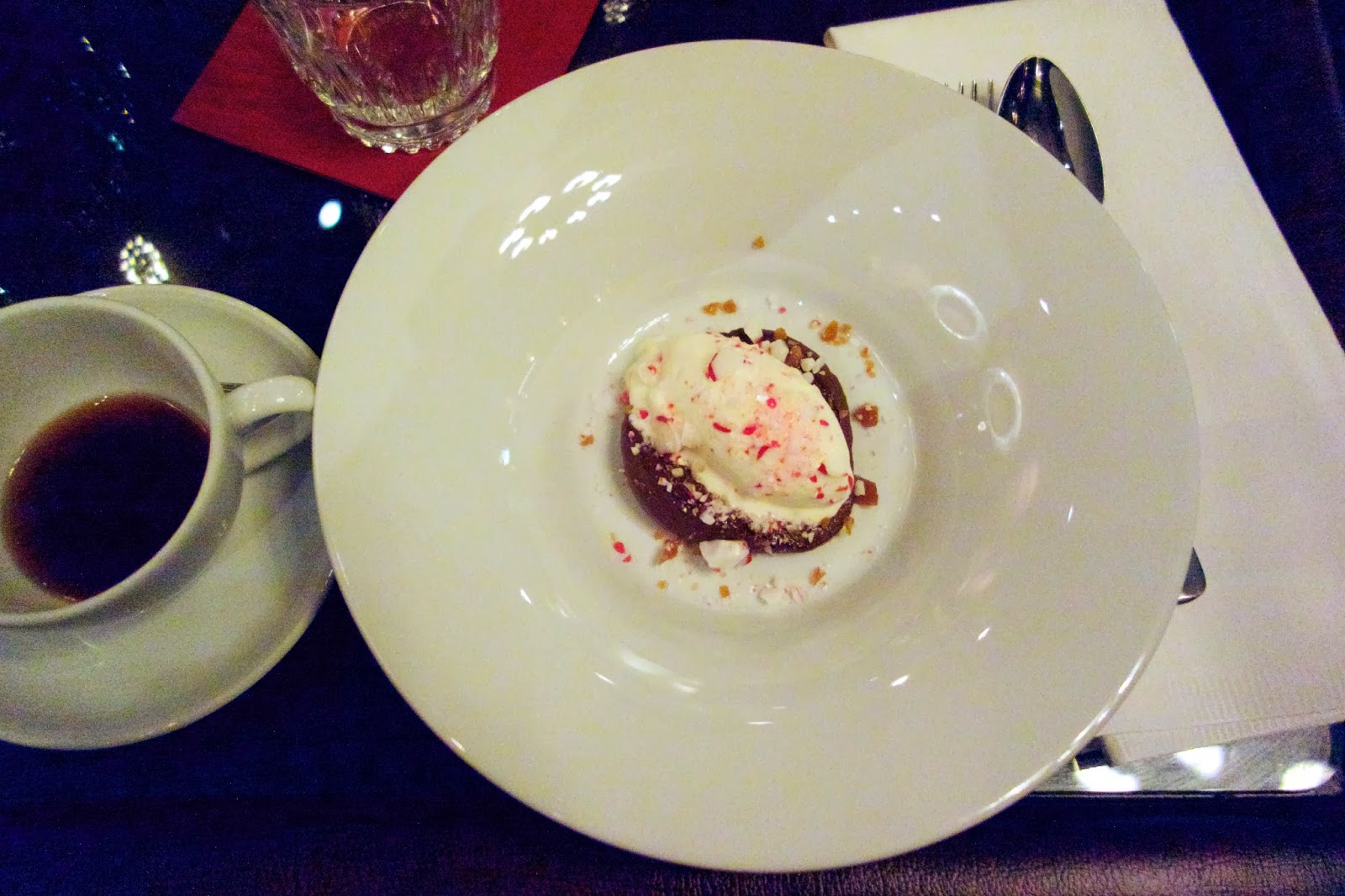 We were still longing for more wine so after a basket of bread to neutralize the palate I ordered a bottle of 2006 State Lane Vineyard Cabernet Sauvignon from Kapcsándy in Napa Valley.
I drank the same wine about a year earlier. I was more floored by the wine last time. It felt a bit closed at the moment. Still an impressive red though. 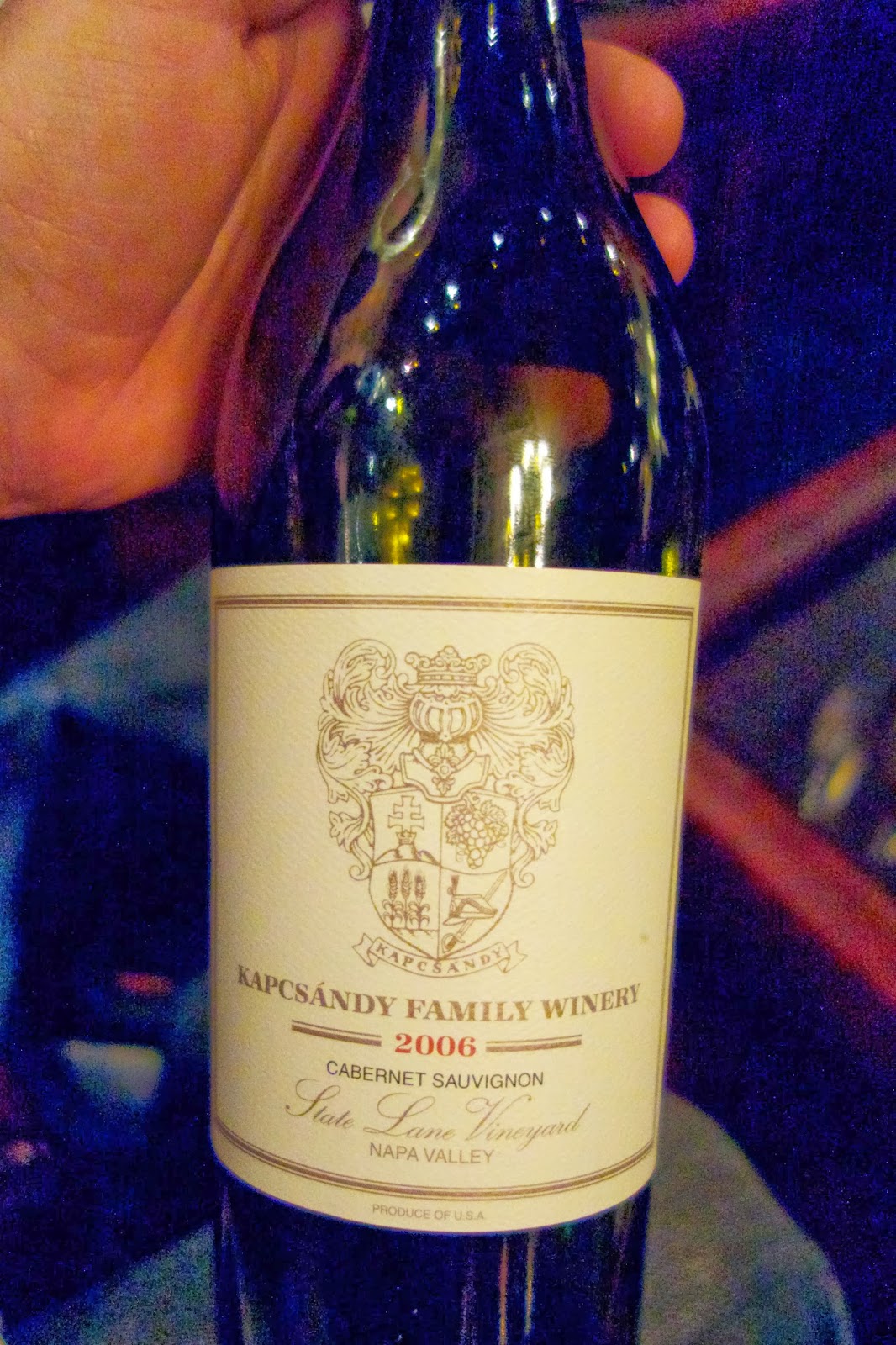 Still thirsty we moved a few blocks to Restaurant Frantzén's wine bar Gaston where my dear friends O-chäf and Mr. Agrell served us two nice last bottles before we strolled home happy in the early morning. 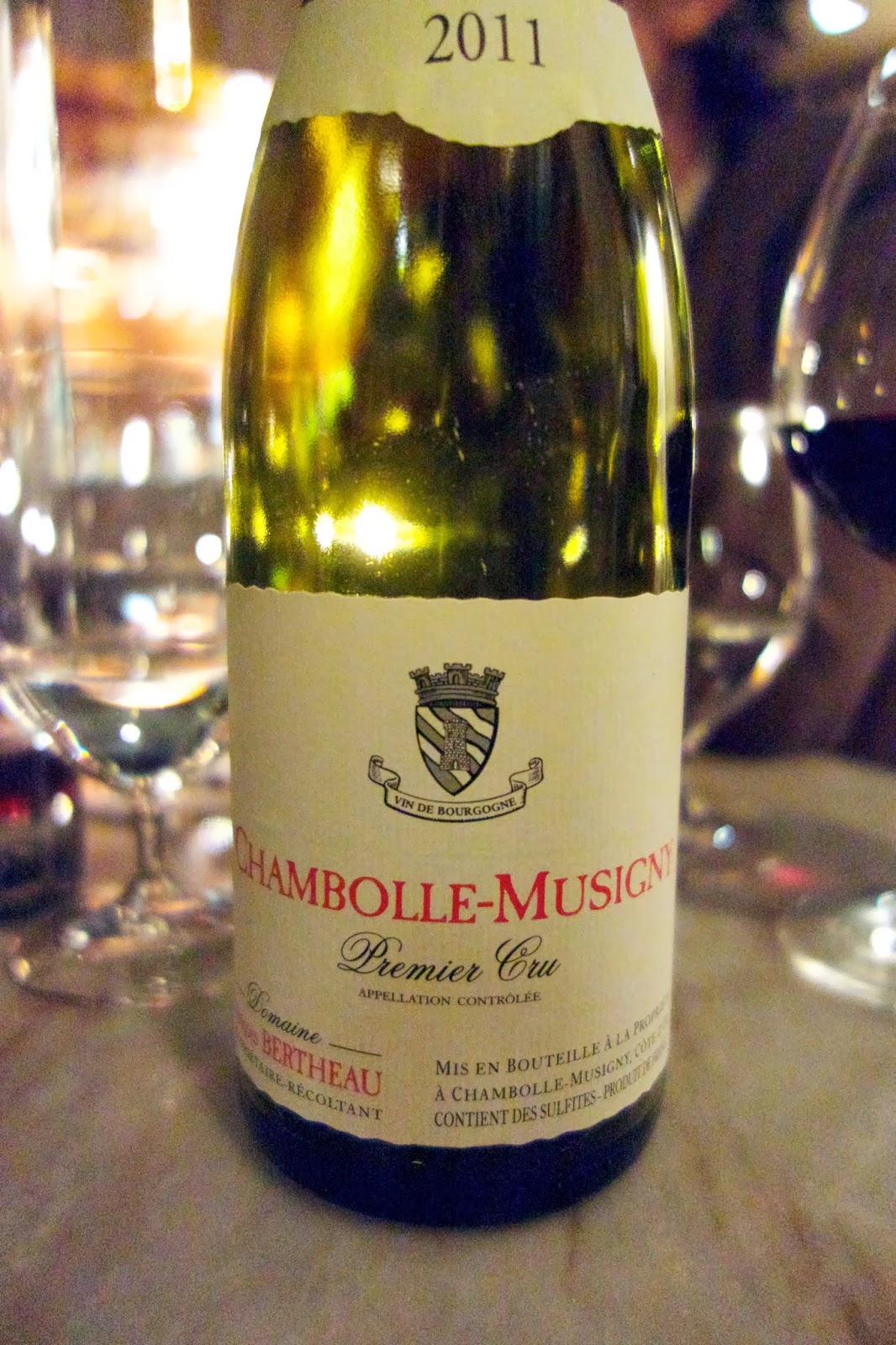 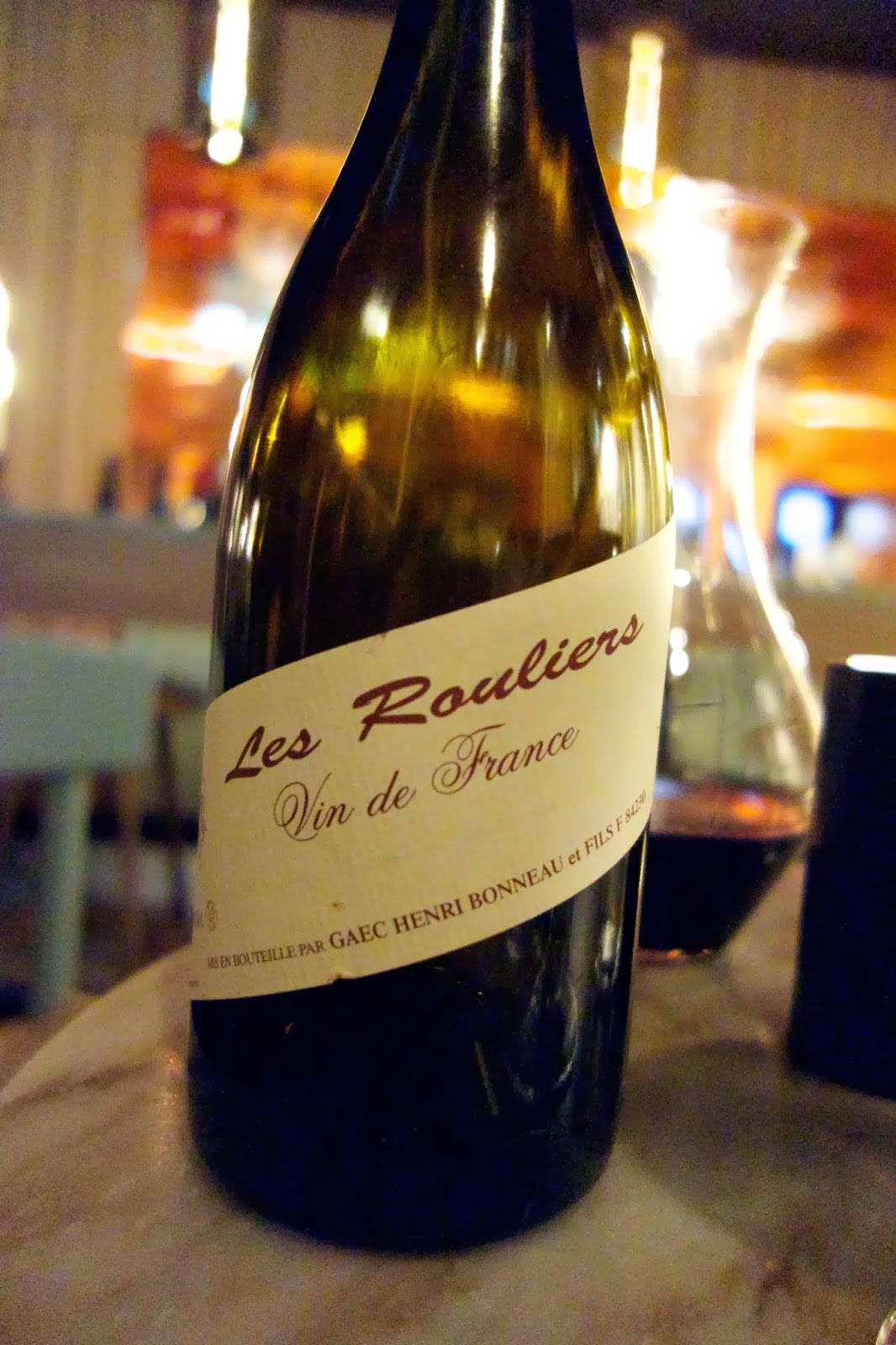