This evening I and C had the pleasure to invite M. Albrektsson and his lovely fiancé for a dinner. M who is a great chef and blogger was visiting Dubai for a few days so a dinner at home was obvious.
We were all a bit "tired" after the previous night in Zuma but after the first sip of NV Bollinger Rosé we were back to life. A rich, food-driven champagne that worked perfectly both as a aperitif and along with the first dish. 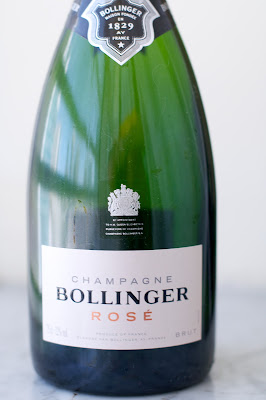 A pure mouthful of the ocean was my plan with this serving. Lightly seared, sliced scallop with oyster, seaweed, salicorn, avocado, dill-pickled cucumber and oyster vinaigrette. Fresh start. 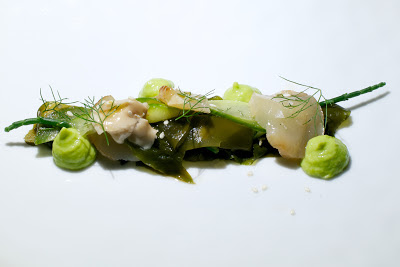 Home made ravioli that i filled with dried mushroom, ricotta, nutmeg and shallot. Small pieces of bread crouton to add texture, brown butter to match the oak flavors from the wine and then topped with a generous amounts of white Alba truffle. 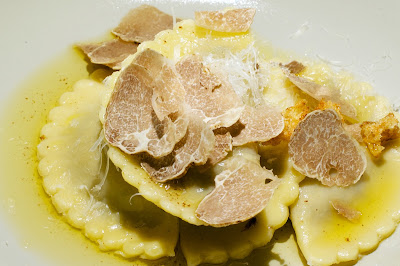 As you can understand this dish screamed after a white burgundy. I opened a bottle of 2009 Meursault Sous la Velle from Rémi Jobard. A bit tropical in the fruit but well balanced with a white mineral character and a fresh acidity surrounded with a round mouthfeel. 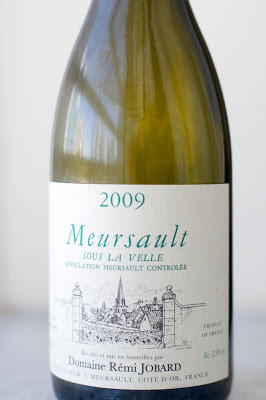 From burgundy we quickly moved to California and Napa Valley.
1999 Insignia from Joseph Phelps is a classic american bordeaux blend. This vintage the grapes were 71% Cabernet Sauvignon, 21% Merlot, 6% Petit Verdot and 1% each of Malbec and Cabernet Franc.
Mature notes of plums, tobacco and wet soil blended with soft tannins and a deep taste of overripe plums. Far from the finesse and grace of the 1997 I had a few years ago and strangely I felt that this bottle already reached its peak. 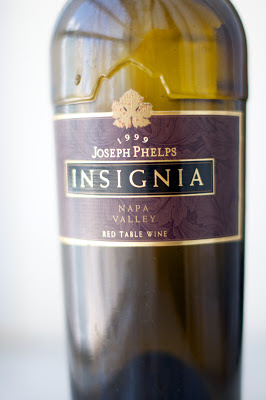 Next I cooked ribeye of Australian wagyu, medium rare and served with white beans, celeriac puree, pickled onion, pancetta and oxtail jus. The dish was finally covered with grated black truffle, 10g on each plate to be precise. Not bad at all I must say. 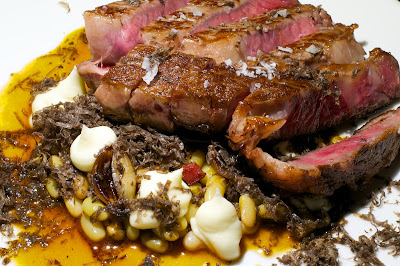 No sweet wine, just dessert.
Vanilla pannacotta topped with cranberry coulis, almond crumble and cranberry jelly. I was really happy with the flavors of this dessert but the pannacotta was a bit to hard in texture. Less gelatin next time. 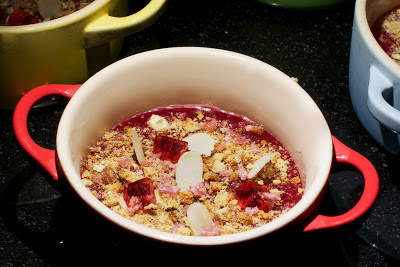 I should have learned...
After a big disappointment at Reflets par Pierre Gagnaire and a mediocre experience at Table 9, I should have learned that fine dining in Dubai is nothing more than a joke. The ethnical, low budget restaurants is normally when you get the best experience in the city but still I chose to go and try S.T.A.Y. which is located in the spectacular One and Only resort on The Palm.

The restaurant is owned by the three Michelin starred chef Yannick Alléno and I was hoping for tasty, classic French food with a twist cooked with superb produce.

The dining room is luxurious and the big tables with the well-ironed tablecloths are placed far from each other in a true, fine dining spirit. Still, rather ugly furnitures.
The service was correct and friendly but a ringing cellphone in one of the staffs pockets is far from ok.
When we entered, the hostess showed us the pastry kitchen which is located inside the dining room, giving the guest something to look at. "This is our beautiful pastry library" she said before she showed us our table. Since we were seated next to the pastry area we could hear how the hostess repeated the same phrase "this is our beautiful pastry library" to every single guest entering the restaurant. Pretty robotic and tiring after a while, and what is a pastry library?

The restaurant manager recommended us to go for the tasting menu which I normally think is the best choice when trying a restaurant for the first time.
We started with a glass of Nv Brut Premier from the Champagne house Louis Roederer along with the selection of appetizers; petit choux filled with gruyère, tuna tartare with bell pepper jelly and finally something they called pizza? which was a artichoke puree, sandwiched between two leaf-thin sheets of crispy, baked dough. All the appetizers went through unnoticed. 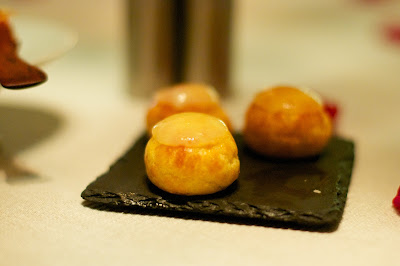 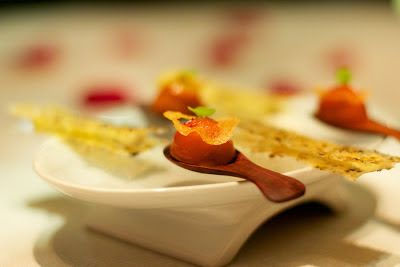 I ordered a bottle of 2006 Im Weingebirge Grüner Veltliner Smaragd from Nikolaihof in Wachau in Austria. It was fat and honey-like in the mouth balanced with a fresh acidety. A decent wine that started to sing on the last verse, don't keep any longer. 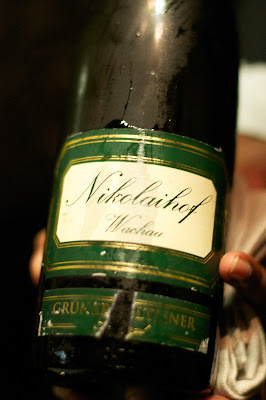 First dish was a cylinder shaped potato filled with sturgeon brandade and topped with radish and a sake consommé. The potato was cold and tasteless and so was the brandade. The only thing on the plate with character was the sake consommé. 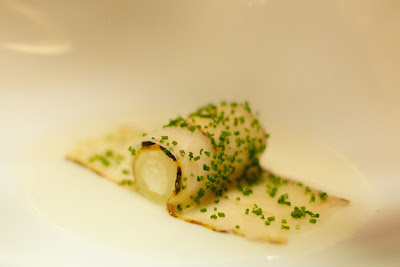 Next up was a dish so bland and bad I even forgot to take a picture of it. Raw pieces of scallop with artichoke as a crisp, foam and puree (same as the appetizer) injected in the scallop. Never, ever have I eaten anything as tasteless. I get a bigger taste sensation from the popcorn at the cinema (at least they are salty).

After that total catastrophe of a dish came lobster pudding with chestnut fettuccine, mushroom coulis and lobster foam. An decent dish but the lobster pudding looked like small, factory-made sausages from the grocery store. 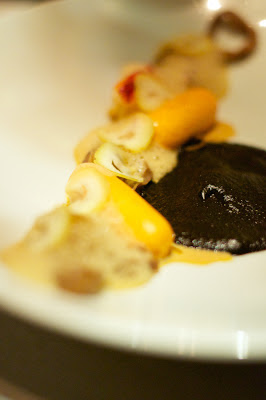 So came the best dish of the evening; Turbot with clams, grilled asparagus and béarnaise sauce. A simple bistro dish, well cooked and the béarnaise was actually seasoned to perfection. 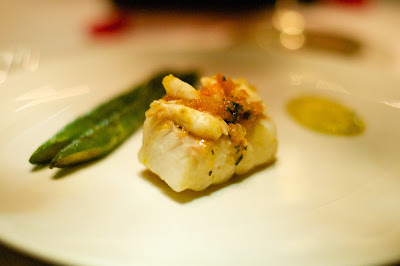 Fillet of lamb with tomato concassé, fennel and olive was a simple, rustic dish. 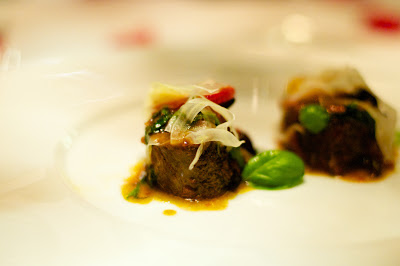 A few petit fours before the grand dessert. 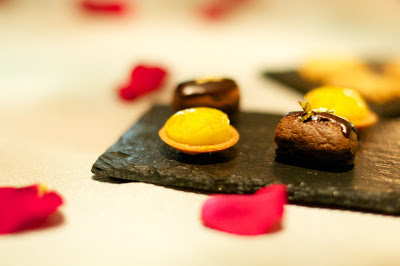 And then it came, the meter long dessert selection from the pastry library. The quince tart was good but the rest of the desserts tasted like something from Starbucks, no finesse at all, just sweet. 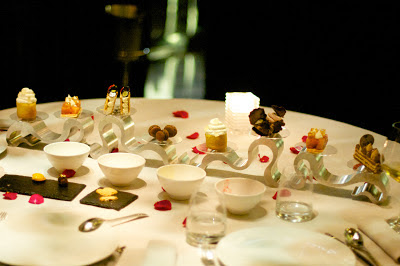 The dessert finally made me feel like leaving, not S.T.A.Y.
http://thepalm.oneandonlyresorts.com/cuisine/stay.aspx

Since I don't like to review my own workplace, I will give you a link to my friend's blog and his view of the restaurant when I, he and our lovely girls went there for an "all in" dinner at Zuma Dubai:
http://gastronomictraveller.blogspot.com/2013/01/zuma-dubai.html