After internship at some of the worlds most famous chefs (Charlie Trotter, Ferran Adrià and Heston Blumenthal) Niklas Ekstedt started his first restaurant, Niklas, in 2000, only 21 years old.
It was a small fine-dining restaurant in Helsingborg in the southern part of Sweden and one of the chefs working there was René Redzepi who now is the head chef and co-owner of the famous restaurant Noma in Copenhagen. I remembered when I, many years ago, went to a guest performance that Niklas had at restaurant Eriks Bakficka in Stockholm and was served foie gras snow.

2005 Niklas became famous for the masses in Sweden as a TV-chef and released several cookbooks. In 2007 he decided to move to Stockholm and opened restaurant 1900. I've never been attracted to visit 1900 and always thought there was more interesting options in the capital. But then, less then a year ago, Niklas opens restaurant Ekstedt.
The unique thing with this restaurant is that every thing is cooked over an opened fire. Tons of birch wood is delivered to the restaurant weekly and there is no electricity in the kitchen. There is a small cast iron stove and a pizza oven, also run by the centerpiece fire.

Gustav Otterberg is the head chef at Ekstedt. He’s a well-experienced chef that got one Michelin star for his food at Leijontornet when he was only 23 years old, not bad.

I was so excited when I entered the restaurant.
The smell of the open fire gave a warm atmosphere and I loved the interior with its details of leather, brass and wood. We were seated on chefs table on bar stools, literally two meters from were the chef was plating the food. Another two meters on my left was the main kitchen, which looked more like a smithy behind a glass wall. We must have gotten the best seats in the room. 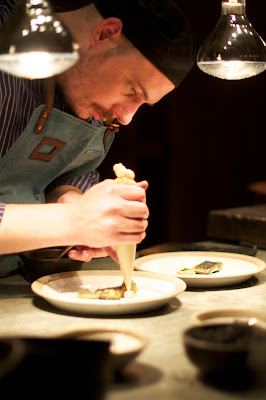 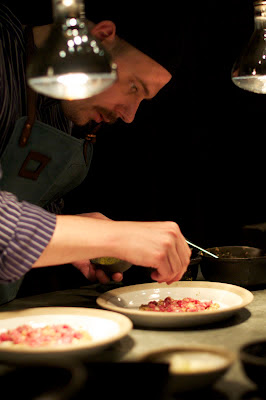 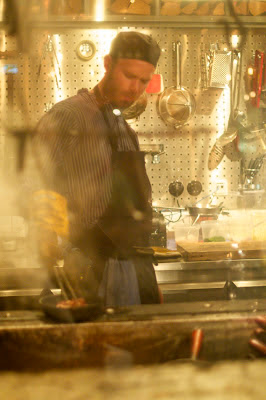 We chose to go for the big, five courses, tasting menu. In the glass we started off with Brut Premièr Cuvée NV from Bruno Paillard. Floral and a food-driven champagne, which I think, lacked a bit of freshness to be a perfect aperitif.

As an appetizer we were served; mini pizza with mozzarella, rocket, basil and truffle, fougasse-bread filled with dried tomato and finally a wrap of lamb. Everything tasty, but as an appetizer it was a bit heavy. The pizza would have been enough. 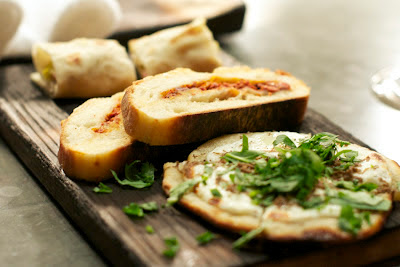 I ordered a bottle of 2006 Allende from Finca Allende in Rioja, Spain. Burgundy-like texture with it's soft, medium full body. Really elegant wine and a true bargain. 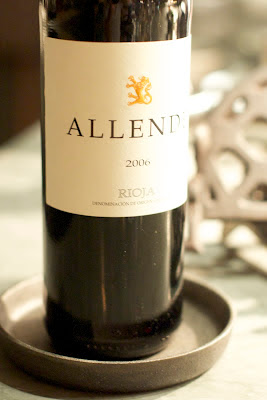 Sour dough bread was torn by one of the waiters and served with butter that was smeared on a stone. Very nice bread and a beautiful, rustic presentation. 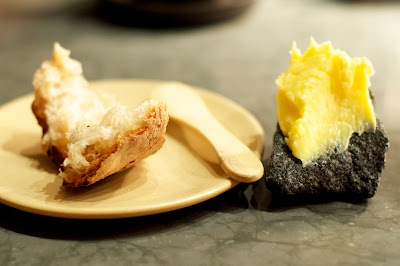 First serving was Turbot baked on hay, served with squid and artichoke. What a fantastic start. 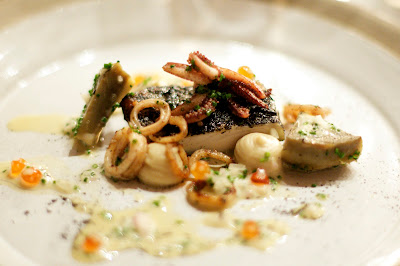 Next two servings were some of the best dishes I have ever eaten. First up was chimney-smoked lobster with a raw lobster cream, tomato and almonds. Indescribable!!! 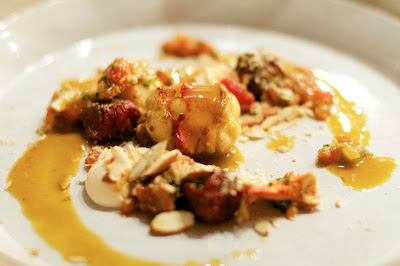 Next, a smoked tartar of beef with bone marrow, chanterelle duxelle, pickled onions, blueberries and pine powder. What a dish, so, so good. Almost like taking a big bite of the forest. 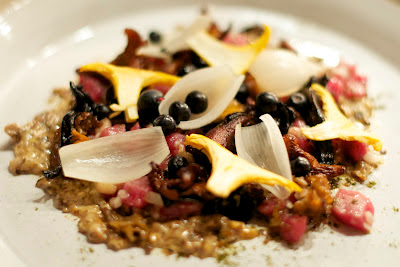 The Rioja was now almost finished so we ordered a glass each of 2009 An/2, which is the second wine of the producer Anima Negra from Mallorca. This wine is a blend of Callet, Mantonegro-Fogoneu and Syrah. Medium-bodied with silky tannins and herbaceous, fruity flavor it was great with the next dish; 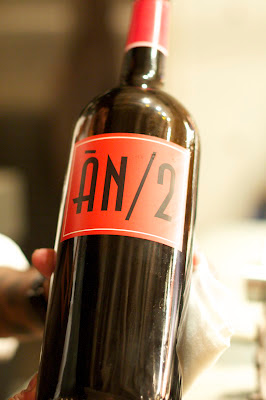 Neck of pork served with pork and truffle sausage, Brussels sprouts and generous amounts of grated truffle. Once again, a magically good dish with rich flavors. 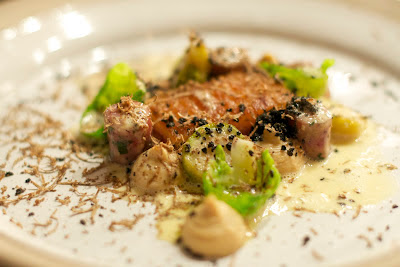 We skipped sweet wine and went straight to the dessert; Rum-flambéed peach with thyme, served with cardamom doughnuts and on the side, in a small dish, was a salted caramel ice cream topped with peach sorbet. What an ice cream, yummy. 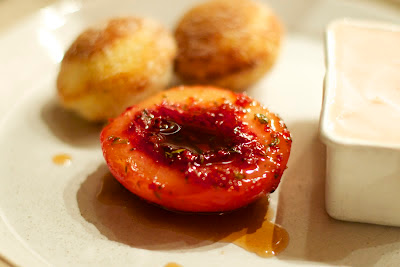 What an amazing dinner we had and I’m chocked if Ekstedt doesn’t get a Michelin star next spring. If I have to try to find anything negative about the food it would be the sizes of the portions, which in my mind was on the edge of being too big, especially with such rich flavors. I will definitely be back and I strongly recommend anyone visiting or living in Stockholm to go there, you’ll have a truly memorable dinner.
Posted by Unknown at 00:16